It seems you are using Internet Explorer 11, which is not supported by this website. We recommend Google Chrome for the best browsing experience.

While Puratos always aims to be a reliable partner in innovation, we also believe in preserving traditional ways of making bread and chocolate. Bringing these aspirations together allows us to serve our customers and consumers in the best way possible, by adding value to tradition.

Our passion for nature, authenticity and diversity has led to our sourdough library which plays a key role in the preservation and renewal of this ancient technique of natural fermentation. We also studied the history of bread and its multiple uses throughout the world so as to be able to offer consumers the best of this product. With the same passion, we preserve the heritage of Belgian chocolate with its incomparable taste, as well as certain old varieties of cocoa.

Research indicates that consumers around the world fondly remember the bread of the good old days, the bread that grandma used to put on the table. However, when asked to describe this, they fail to do so.

This is why Puratos started to investigate what the bread of the good old days probably looked like. We discovered a reference to the “best bread” in the world by the Roman poet Horace in 37 BC. He wrote that the “best bread in the world” is Altamura bread, from the Puglia Region in Italy. In Horace’s time, bread was made with four key ingredients: water, flour, salt and ... sourdough. Sourdough provides a fantastic flavour and great texture. This is rather similar to local wines, beers and cheeses that result from fermentation of local micro-organisms in a micro climate. By using durum wheat from Altamura in combination with local micro-organisms, Puratos created O-tentic Durum, our greatest baking innovation since the launch of S500 in 1975.

We used the latest fermentation technology, based on years of research, to capture the spirit of Altamura and make it available to the rest of the world. But we also decided to protect the wonderful diversity of bread from all around the world. We gather sourdoughs from various regions and preserve them in a specially constructed “Sourdough Library” in the east of Belgium. Here, we are currently preserving over one hundred and twenty sourdoughs from around the world, and are thus playing a key role in maintaining the biodiversity and heritage of bread. Since sourdoughs are often passed from generation to generation, they remain delicate and can be easily misplaced or damaged, leaving the world a little poorer than before.

The history of sourdough is so rich that our sourdough library, where we store, document and protect its heritage for the future, was not sufficient. So, we decided to create the “Maison du Levain”, a place dedicated to the history, the present and the future of sourdough where visitors will be able to discover the origin and evolution of sourdough.

Puratos has been passionate about sourdough for years, so we are convinced that The Future of Bread Lies in its Past. We are excited to share this understanding of fermentation with our clients and help them create tasty and high-quality breads, just like in the good old days. And in the future! 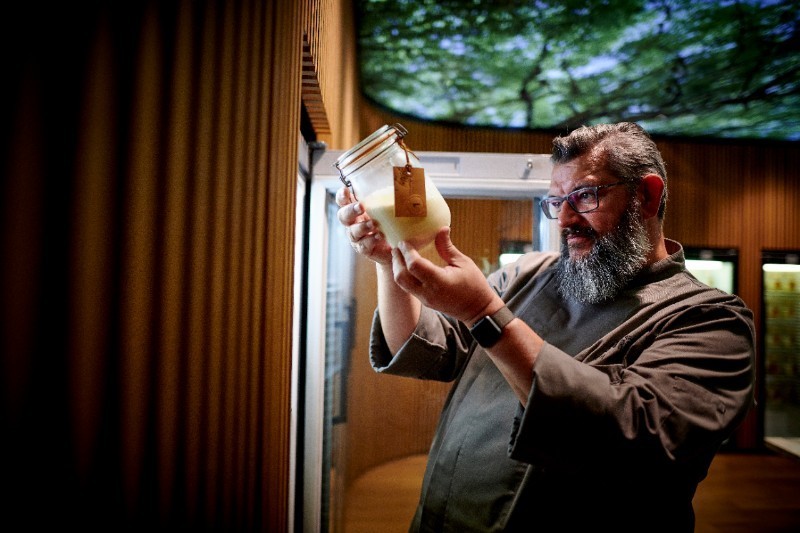 Belgian chocolate is part of our direct heritage, as the history of Puratos started in Belgium. But what makes Belgian chocolate so different? Already in the 19th century, chocolate had to contain at least 35% cocoa to be named as chocolate. The refinement in Belgium is such that chocolate leaves no grain sensation when it melts on the tongue. Moreover, traditionally, Belgian chocolate manufacturers have always worked with high-quality cocoa beans, which give the chocolate a particular taste. Finally, the praline, invented in Belgium in 1912, has become a typically Belgian product associated with all kinds of celebrations, and has greatly contributed to the fame of Belgian chocolate.

Puratos is continuing this tradition which has made the reputation of Belgian chocolate throughout the world. Belcolade has produced chocolate for 30 years now in Belgium, using the finest raw materials and respecting the Belgian way of producing chocolate. Belcolade uses no fat other than that of the cocoa and only natural vanilla. As a result, Belcolade chocolate has a particular, quite distinctive taste, highly appreciated in consumer tests.

Puratos works in cooperation with the Choco-Story museums to share the story of cocoa, its processing and how it is turned into chocolate, and to promote world-class Belgian chocolate. Seven museums are already open in Bruges, Brussels, Paris, Prague, Uxmal, Valladolid, Colmar and Beirut. Another important sustainable development project for Belcolade started in 2008 with the acquisition of a plot in Chunca (formerly Tikul) in Yucatan, Mexico. On 60 hectares we planted criollo, one of the oldest, rarest and finest varieties of cocoa.

What makes this cocoa very special is its low polyphenol content. During the fermentation process, particularly mild flavours develop, creating an exceptional chocolate. That is why Puratos has deployed the necessary resources to protect this old, nearly extinct variety to produce a chocolate with unique tasting properties.

Our objective is to plant more than 300.000 trees (66.000 already planted) – a project which will provide a wildlife sanctuary and contribute to local environmental conservation and biodiversity.

In 2017, 315 additional hectares of land were purchased, of which 70 have already been prepared for planting, which promises far more criollo to come – with a bit of patience!

On the Chunca plantation, traditional Maya huts have been built to house a collection of native Mexican cocoa varieties. There are five old cocoa varieties in Mexico, and we want to preserve them using the model of the sourdough library.

In Mexico, Puratos will operate the whole cocoa-chocolate chain. The Chunca plantation will provide some of the beans we need, but above all provide us with knowledge on cocoa growing. In Comalcalco, Tabasco we bought four hectares where we installed our collection, fermentation and drying centre. These beans will soon be processed into mass in a new factory next to our distribution centre in Mexico. The cocoa mass will be sent from there to our chocolate plants in Tizayuca, Mexico and in the USA to produce chocolate with Mexican beans, and to Belcolade to produce a Mexican origin chocolate.

An integral aspect of sustainability is the responsible sourcing of our raw materials, more particularly cocoa and palm oil.

Our commitments to you and to future generations

Save preferences Cancel and return